LUXEMBOURG–(BUSINESS WIRE)–SES announced today that it has signed agreements with key infrastructure service providers around the world to build its eight initial O3b mPOWER satellite ground stations. Construction has already started on these advanced technology satellite ground stations, which will become operational in the second half of this year. The eight sites will provide telemetry, tracking and control capabilities to enable SES’s management of the constellation. They will also be leveraged to raise the satellites into the right orbit after the scheduled launches.

As previously announced, two of the satellite ground stations are located at Dubbo, NSW, Australia (operated by Pivotel) and Thermopylae, Greece (operated by OTE). Other locations include Merredin, Perth, Australia; Phoenix, Arizona, US; Chile; the United Arab Emirates; Senegal as well as SES’s own satellite ground station in Hawaii. Four out of the eight sites will be co-located and operated with Microsoft’s Azure data centres; the one-hop connectivity to the cloud from remote sites will provide O3b mPOWER customers the ability to optimise business operations with significant flexibility and agility.

The O3b mPOWER satellite ground stations have many technically advanced features compared to the existing O3b satellite ground station. They include a new generation of fast-install 5.5-metre carbon fibre antennas which can be installed without the need for expensive and time-consuming photogrammetry. In addition, they will utilise energy-efficient solid-state power amplifiers, and a low electrical load for the antenna control unit (ACU).

The satellite ground stations will use SES’s gateway management system for automated operations and handovers, which will be tightly integrated with SES’s unique resource management capability, Adaptive Resource Control (ARC) and other SES software sub-systems. With this configuration, SES will dynamically manage and optimise space and ground resources to meet the changing needs of its customers. These combined technology advances result in improved efficiency and lower total cost of ownership.

SES has a bold vision to deliver amazing experiences everywhere on earth by distributing the highest quality video content and providing seamless connectivity around the world. As the leader in global content connectivity solutions, SES operates the world’s only multi-orbit constellation of satellites with the unique combination of global coverage and high performance, including the commercially-proven, low-latency Medium Earth Orbit O3b system. By leveraging a vast and intelligent, cloud-enabled network, SES is able to deliver high-quality connectivity solutions anywhere on land, at sea or in the air, and is a trusted partner to the world’s leading telecommunications companies, mobile network operators, governments, connectivity and cloud service providers, broadcasters, video platform operators and content owners. SES’s video network carries over 8,200 channels and has an unparalleled reach of 361 million households, delivering managed media services for both linear and non-linear content. The company is listed on Paris and Luxembourg stock exchanges (Ticker: SESG). Further information is available at: www.ses.com. 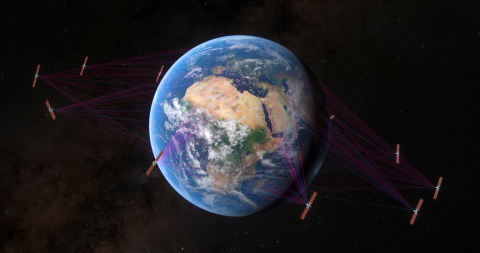